ROG has partnered with EK Water Blocks to create an integrated VRM water-cooling solution that keeps the massive power of the latest AMD Ryzen processors under control. Keeping with the water-cooling theme, the ROG Crosshair VIII Formula features on-board lighting that casts a “rainfall” design which pops against the board’s mirror finish and is accented by the ROG logo. With its incredible cooling performance and gamer-oriented features, ROG Crosshair VIII Formula is the perfect foundation for your next high-performance gaming rig​.​

Heatsinks are extremely important for motherboards, as they absorb heat from critical areas to ensure components do not stagger due to overheating. With VRM, chipset​ and M.2 heatsinks, ROG Crosshair VIII Formula ensures efficient and stable operation even when pushed hard.

ACTIVE CHIPSET HEATSINK DESIGN
PCle 4.0 provides twice the bandwidth for data flowing through the chipset, which creates more heat than the previous generation.
The Formula features an actively cooled heatsink to prevent throttling during sustained transfers.

* L10 bearing lifespan specifies the minimum number of hours that 90% of the bearing are expected to last.

M.2 HEATSINK
ROG Crosshair VIII Formula is equipped with a stylish M.2 heatsink that keeps your SSD cool. By efficiently dissipating heat away from the M.2 area, it minimizes the possibility of the performance-sapping throttling that can happen when drives become too warm.

POWER DESIGN THAT BUCKS TRENDS
The monstrous compute power of multi-core processors necessitates a power circuit that rapidly responds to massive current swings. Featuring an array of 16 strategically paired power stages, the Formula’s VRM is geared for any workload and all operating conditions.

Robust power delivery starts at the component level. Every aspect of the ROG Crosshair VIII Formula’s VRM is generously over-specified for the task.

POWIRSTAGE® MOSFETS
The VRM is comprised of 16 IR3555 PowIRstages, each rated to handle 60 amps.

MICROFINE ALLOY CHOKES
Each PowIRstage is accompanied by a high-permeability alloy-core choke rated to handle 45 amps.

UNCOMPLICATED SYSTEM TUNING​
ROG gives you powerful tools that make optimizing your system fast and easy. For those who relish fine-grained control, the UEFI BIOS has a wealth of advanced options organized into intuitive categories that provide the ability to tweak every aspect of your system​.

UEFI BIOS
The renowned ROG UEFI (BIOS) provides everything you need to configure, tweak, and tune your rig. It offers intelligently simplified options for newcomers to PC DIY, as well as comprehensive features for seasoned veterans.

Designed to simplify setup, EZ mode presents all the vital settings and stats on a single page. With guided wizards, drag-and-drop functionality, and one-click application of important settings, your rig will be up and running in no time.

ACCURATE VOLTAGE MONITORING
Conventional motherboards ues single-ended sensing tapped from a location that isn’t ideal, leading to a large disparity between the actual voltage fed to the CPU and the value reported to software. The Formula features a differential sensing circuit that simplifies overclocking and tuning by allowing you to track voltages more accurately.

PERFORMANCE LEVEL UP
AI Suite 3’s dashboard-style control panel lets you fine-tune almost every aspect of your system. Get the best balance between performance, cooling, stability, and efficiency via one simple and intuitive interface.​

SupremeFX
ROG’s SupremeFX audio technology has levelled up, delivering an exceptional 113dB signal-to-noise ratio on the line-in connection to provide best-ever recording quality. We’ve also added a low-dropout regulator for cleaner power delivery to the SupremeFX S1220 codec, an ESS® ES9023P digital-to-analog converter for superior front-panel output, and a Texas Instruments® RC4580 op amp for high gain with low distortion — all to deliver audio that envelops you as never before.

ASUS NODE CONNECTOR​
ASUS Node is a proprietary bi-directional interface that allow ASUS motherboards to communicate with other system components, opening up a wealth of new options for system builders.​

*A head-related transfer function is an audio algorithm derived from sound data recorded through a dummy head. Test tones are played from a spherical grid around the dummy head to obtain subtle changes in sounds that come from different directions. The results are combined into an algorithm that allows Sonic Studio’s virtual surround to process sound true to life.

ARMOURY CRATE
Armoury Crate is a new software utility designed to give you centralized control of supported ROG gaming products. From a single intuitive interface, Armoury Crate lets you easily customize RGB lighting and effects for every compatible device in your arsenal and synchronize them with Aura Sync for uniﬁed system lighting effects. The software also provides control of settings for a select and growing number of ROG products, including keyboard and mouse preferences as well as laptop overclocking and fan speeds, making it easier to tune the look and feel of your system. Armoury Crate even features dedicated product registration and ROG news areas to help you stay in touch with the ROG gaming community.

THE POWER OF AMD 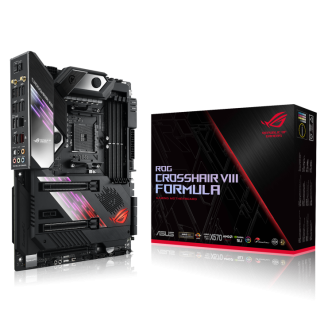